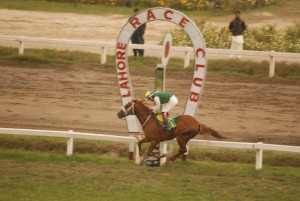 CELEBRATION by Halling won the Pakistan Derby at Lahore Race Club for owner Makhdoom Syed Ahmad Mahmud out of Stella Marine, who I bought for 11,000 Guineas at Tattersalls December Sale in 2010.  Second, by 3 lengths, was My Guest with Falling Rain a Distance back in third – all out of mares I bought for Pakistan.  This was the second year in a row that I won the Pakistan Derby and represents yet another win in a race that I have been lucky enough to win on many occasions.

KRYPTON FACTOR was a very honourable second in the Group 3 Al Shindagha Sprint at Meydan, beaten only a neck by another fellow Group 1 Golden Shaheen winner in ReynaldoTheWizard.

Hototo ran with great credit during the Dubai Carnival.  He won the $120,000 Longines Master Collection Handicap at Meydan for owner/trainer Fawzi Nass and was then a close second in the $175,000 Meydan Sobha Handicap.

Firstly:- Monsieur Bond 2yo filly SATIN CHIC just proves that you don’t need to spend big to have success.  She was a £800 yearling purchase for Bryan Smart at DBS Autumn Sale and was placed on her début before winning over 6 furlongs at Hamilton, both in May.  She should progress on from this as well.

Secondly:- I was also delighted to see FULL ROSE win the Group 2 German 1,000 Guineas on her second start for the year, having previously this year won the Listed Henkel-Stutenpreis. I bought her 2013 Arcano sister also at the DBS Autumn Sale, again for only £800. 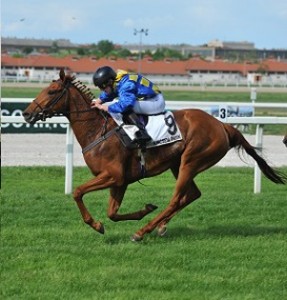 MISS TURPAN by Hernando came with a storming late run to win the Listed Hazafi Dij (Hungarian 1,000 Guineas) having won her only previous start in Budapest.  Purchased with trainer Szuna (Sabie) Szabolcs at Tattersalls Autumn Horses-in-Training Sale in 2014 for only 6,500 Guineas out of Sir Mark Prescott’s stables.  Fourth in the race was Dirty Dreamer a 4,000 Gns. yearling purchase for Gyorgy Deak in 2013.

Grade 1 winning 2yo CARPE DIEM (by Giant’s Causeway) started his 3yo campaign in style, taking the Grade 2 Tampa Bay Derby by 5 lengths.  His next start was in another Kentucky Derby trial, the Grade 1 Blue Grass stakes at Keeneland winning in comfortable fashion by 3 lengths.  Sadly he didn’t produce his best in the Kentucky Derby but the season is only just getting going. He is a half-brother to winning Tale Of The Cat mare, Dreamwriter, who had a MasterCraftsman filly in March and is safely in-foal to Distorted Humor.  I bought Dreamwriter for 36,000 Guineas as a filly to go to stud in 2011 for Palmerstone Bloodstock, which is an EIS scheme.

Darshaan mare IMCO IMAGINATION had her best result yet when her 3 year old son GOLDSTREAM, by Martino Alonso, won the Group 2 Derby Italiano by 3 lengths.  Imco Imagination was purchased as a filly in-training to go to stud.  She has also bred BIT OF HELL, a dual Listed winner in Italy & Group 3 placed in Australia, and Sweet Lollipop, a Listed placed filly.

REWARDING HERO out of Caldy Dancer had a most successful season in Hong Kong starting by winning the Group 3 Challenge Cup in January before being 3rd in the Group 1 Stewards’ Cup & Group 2 Chairmans’ Trophy and 2nd in the Group 1 Champions’ Mile, as well as being placed in a couple of other Group 3 races. Caldy Dancer was purchased when in-training as a broodmare prospect.

LUCKY KRISTALE got her career back on track when finishing 2nd in the Listed Leisure Stakes at Windsor.  This dual Group 2 winner is a half-sister to dual winner I See You who I bought to go to Saudi Arabia as a breeding prospect in February 2013.

Meiner Milano out of winning Polish Precedent mare, Pearl Barley, was 3rd in the Grade 3 Chunichi Shimun Hai in Japan. Pearl Barley is a half-sister to Group 2 winners Nayyir and Sky Hunter.  Pearl Barley was purchased for Alan Smith.

I bought 3yo filly Kalifi, by First Defence, off Juddmonte Farms for 4,000 Guineas at Tattersalls July Sale 2014 for veteran breeder, Richard Tucker of Nelson Farm Stud.  Her half-sister, Reaching Ahead, is now dam of Full Of Beauty who was only beaten a head in the Group 2 Oaks d’Italia on her seasonal début (and only her second ever start).