I am very proud to have bought the very first winner at the inaugural Saudi Cup day at King Abdulaziz Racetrack in Riyadh.  PORT LIONS had won all 3 races in Bahrain for trainer Fawzi Nass, including the Crown Prince Cup, since his purchase privately last summer.  The bookmakers failed to assess the Bahraini form and sent the gelding off at 40-1 in the $1 million Neom Turf Cup over 2,100m on turf.  Having been asleep when the stalls opened, the HH Shaikh Nasser bin Hamad Al Khalifa owned 5 year old, came with a storming run down the outside to mow down dual Gr.1 winner Deirdre.

Port Lions, who cost less than £100,000, was bought privately after he won his second race in Ireland with an official rating of 87.  He has improved under trainer Fawzi Nass’s care and won in Saudi off a rating of 111. 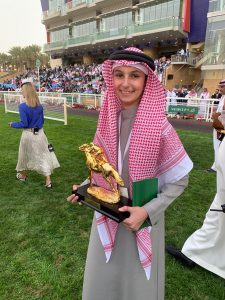