HARZAND became that very rare racehorse, a dual Derby winner, when showing real guts and determination to win the Group 1 Irish Derby at the Curragh following on from his stylish win in the Group 1 Epsom Derby.

Harzand‘s dam, HAZARIYA, was purchased from the Aga Khan’s Stud by Oliver at the 2014 Goffs November Breeding Stock Sale for regular clients, Newsells Park Stud, for €480,000. 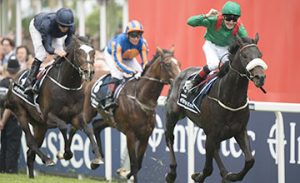 Hazariya was in-foal to Fastnet Rock at the time Oliver purchased her and she subsequently foaled a filly in 2015.  She has had a Dansili filly in 2016 and is currently in-foal to Invincible Spirit.

Harzand is now being aimed at the Prix de l’Arc de Triomphe to try and emulate his sire Sea The Stars.

This was Oliver’s third Derby success of the year, having also won the Pakistan Derby again, this time with local bred colt NO REGARD, whose victory was emphatic and he broke the track record in Lahore.  Oliver purchased his dam AUBURN PLACE privately in England as a filly in early 2012 for Mr Shahid Hussain and she was covered that spring in Pakistan with another of Oliver’s purchases, DUBAI EDITION.  So No Regard was  the first foal of this Compton Place mare who hails from the family of dual Derby winner, Old Vic.